skip to main | skip to sidebar

The Most Beautiful Thing in the World 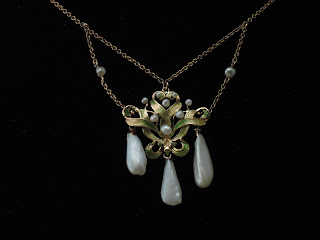 Once upon a time, it was a necklace; it was a pretty, token of affection that a young man selected and presented to his young wife. It was special, when he bought it; a beautiful golden trinket, enameled in green and decorated with pearls, imported all the way from France. She treasured it and wore it on special occasions and then handed it down to her daughter. Her daughter passed it on to a grand-daughter when she turned 16. That grand-daughter wore it in her wedding and later passed it on to her daughter. She still has it, for now.

Five generations, over a hundred forty years. If only pearls could talk...

Even before I knew how old the necklace was or anything about jewelry, the piece had become mythic. My mother kept it safely tucked in the back of her dressing table drawer. Sometimes she would take out different pieces of jewelry and tell the stories behind them. When I look at the necklace, I still hear the soft squeak of the wooden drawer followed by the rustle of jewelry boxes and tissue paper. I feel the heavy clank of the wobbly iron piano stool (with a lump under one cheek) that served as a dressing chair. I smell the feminine dust of cosmetics and old perfume cards and feel the heat of the make-up mirror lights that would scorch, if you touched them. This was a safe place of confidence, womanhood, and history.

I look at this necklace and strands of memories and aspirations begin to unwind. To sit on that stool was to be a woman (if only my feet touched the floor). To wear the necklace was to be a special woman on her way to a very special party. Every once in a while, I was allowed to put it on for a minute... I was transformed from a gangly, mop-headed goof to a statuesque, responsible person, capable of protecting such an extraordinary object.

The first time I was allowed to wear the necklace out of the house was for a high school dance. I attended the dance alone. I wore a hand-me-down dress and borrowed a pair of mom's old shoes. Around my neck was the necklace and it imbued me with a sense of power and confidence. I was a fearless, Amazonian Cinderella marching into that dance; I had no need for a Prince Charming because the magic was all for me.

On my wedding day, my mother presented the necklace to me and placed it around my neck. It was a right of passage. Not to womanhood, as I believed all those years ago, but to a shared history of women. I have become a part of the necklace and all its past is a part of me.

In the beginning, it was just a necklace. Five generations ago, a woman (Mary Catherine) thought it was special enough to care for it and share the story. It is not really a necklace anymore, it is a history of four lives connected through time and space by a tiny bit of gold and pearls and the slight shimmer of green enamel. It is the most beautiful thing in the world.
Posted by Anne Jones at 4:14 PM No comments: